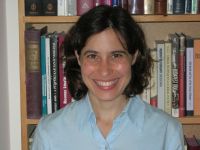 Melissa Feinberg is associate professor of history at Rutgers University. She is the author of Elusive Equality: Gender, Citizenship and the Limits of Democracy in Czechoslovakia, 1918-1950 (Pittsburgh University Press, 2006). This talk is part of her current book project, which examines fear as a means of political mobilization during the first years of the Cold War. Recent articles related to this project include “Fantastic Truths, Compelling Lies: Radio Free Europe and the Response to the Slánský Trial in Czechoslovakia” (Contemporary European History, 2012) and “Soporific Bombs and American Flying Discs: War Fantasies in East-Central Europe, 1948–1956” (Zeitschrift für Ostmitteleuropa-Forschung, 2013). Another recent article in the Journal of Women’s History (2011) was inspired by her fascination with a 1944 survey of rural Bohemian women that delved into their housekeeping secrets and home décor. She is also an editor of Aspasia, a yearbook of women’s and gender history in Central, Eastern, and Southeastern Europe.