Related talk by one of the coordinators

The Gender of Informal Politics: Evidence from Russia and Iceland

Advanced Research Collaborative (ARC)
Social scientists must re-conceptualize power to bring both informal politics and gender to the forefront.  Scholars of post-Soviet hybrid regimes are innovatively theorizing the interplay between formal and informal institutions and networks.  Feminist scholars have shown how these institutions and informal networks are often gendered.  Based on in-depth fieldwork in the seemingly very different cases of Russia and Iceland, I show how the radical liberalization of the last four decades created a bait-and-switch.  Constitutionalism and equality are promised at the same time that informal networks consolidated informal institutions that undercut these promises.  With evidence of egregious sexism, homophobia and backroom deals in both cases, I develop a theory of gendered informal politics that is relevant to many places around the world.

Janet Elise Johnson is an Associate Professor of Political Science and Women’s Studies at Brooklyn College, City University of New York, and Visiting Scholar, Center for European and Mediterranean Studies, New York University.  Her work focuses on the relationship between gender and politics, in connection to social movements, violence against women, democratization, and public policy, especially in postcommunist contexts.  Her books include Gender Violence in Russia: The Politics of Feminist Intervention (2009) and Living Gender after Communism (edited with Jean C. Robinson, 2007).   In the last few years, her journal articles have appeared in the Nationalities Papers, Politics & Gender, Communist and Post-Communist Studies, and Signs: Journals of Women in Culture and Society.  She has also published pieces in The New Yorker blog and The Nation.  Her current project investigates the impact of informal politics on women politicians, women’s/feminist movements, and gender equality policymaking, based on the cases of Russia and Iceland.  She holds a BA from Duke University in Public Policy and a PhD in Political Science from Indiana University.

GENDER VIOLENCE, CONFLICT and THE STATE

free and open to the public l refreshments will be served

for lunch, rsvp by March 31 at human.rights@lehman.cuny.edu

This is an excellent movie that should not be missed. It takes place in Tbilisi, Georgia in the early 1990s and is  about what happens to two young girls who are fast friends. The gender relations , including violence and early marriage in which these girls are entrenched and fight to some degree,, is a theme of the movie.  It is situated in the fighting over Abkhasia and it has a real sense of authenticity with acting by those from Tbilisi.  The cinematographer is excellent, of Romanian movie fame. Really worth seeing..

Tbilisi, Georgia, 1992: Civil war is raging in the province of Abkhazia. Two fourteen-year-olds, Natia and Eka, find their childhood coming to an end. Natia’s alcoholic father constantly terrorizes her entire family. And Eka is fatherless, and rebels against her mother and older sister. These two friends cannot find any peace outside their family either as every day is filled with anxiety about what the future will hold for them.

Women and Transformation in Russia

(an editor and some contributors are former workshop speakers)

Series: Routledge Studies in the History of Russia and Eastern Europe 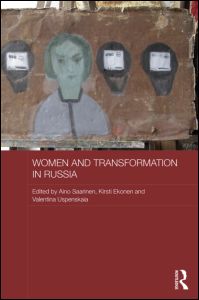 This book looks at Russian women’s mobilization and agency during the two periods of transformation, the turn of the 19th-20th century and the 20th – 21st century. Bringing together the parallels between the two great transformations, it focuses on both the continuities and breaks and, importantly, it shows them from the grassroots point of view, emphasizing the local factor. Chapters show the international and transnational aspects of Russian women’s agency of different spheres and different historical periods. The book goes on to raise new research questions such as the evaluation and comparison of Soviet society and contemporary Russia from the point of view of gender and women’s possibilities in society.

The Association for Women in Slavic Studies (AWSS) is soliciting paper presentations on the theme of “Women, Gender, and Revolution in Slavic Studies” for its 6th Biennial Conference to be held on Thursday, April 10, 2014 at the Ritz-Carlton Hotel in Atlanta, GA.  The conference will be held in conjunction with the 52nd Annual Meeting of the Southern Conference on Slavic Studies (SCSS), which opens Thursday evening and runs through Saturday.  Participants of the AWSS Conference are encouraged to attend and participate in the SCSS conference as well (a separate CFP will be issued for that conference).  AWSS Conference participants are eligible to receive the SCSS rate for the hotel, $165.00/night.

The theme of women, gender, and revolution can be approached in a variety of ways.  Most concretely, the these addressed the actions of men and women in political revolution, broadly conceived, including (but not limited to) events of 1848, 1905, and 1917, events leading up to the fall of Communism in Eastern Europe, and the post-Community transformations after 1989. The theme also invites the study of gendered representations of revolutionary events, and of significant transformation in gender roles at any time in Russia and East European History.

The keynote talk for the conference will be delivered by Janet Johnson, Associate Professor of Political Science and Women’s Studies at Brooklyn College, City University of New York.  Dr. Johnson (PhD 2001, Indiana University-Bloomington) is an expert on gender, violence, and civil society in post-communist transitions in Eastern Europe.  She has published and spoken widely on these subjects.  Her talk at the conference will be on “Revolutionizing Gender Studies”:  Though not everyone understands it, the study of women in Slavic Studies revolutionized gender studies by clarifying that change of regime–such as from communism to post-communism–radically alters gender.  Russia’s recent move toward authoritarian should also make us re-think gender, this time by highlighting the role of informal networks, practices, and institutions.  Gender-blind social scientists are claiming these notions as their own, even though they have been hidden there all along in gender studies, especially among those of us who study places outside of Western Europe and North America.

The conference organizers invite proposals from scholars at all stages in their careers and in any discipline of Slavic Studies (history, literature, linguistics, political science, sociology, anthropology, economics, gender studies, etc.).  Proposals should consist of a 250-word abstract of the paper (including the paper’s title) and a brief one-page CV that includes author’s affiliation and contact information.  Proposals are due by December 15 to Sharon Kowalsky, Associate Professor of History, Texas A&M University-Commerce, Sharon.Kowalsky@tamuc.edu.  Participants will be notified of their acceptance approximately four weeks after the proposal deadline.

Any questions about the conference or the program should be directed to Sharon Kowalsky (Sharon.Kowalsky@tamuc.edu) or Karen Petrone (Petrone@uky.edu).