Join us for the fourth workshop this semester, on Monday, March 26

Mieke Verloo
professor of Comparative Politics and Inequality Issues,
Radboud University, The Netherlands
director of the multidisciplinary research hotspot Gender and Power in Politics and Management; affiliated with Gender and Diversity Studies

“Understanding Varieties of Opposition to Gender Equality in Europe” 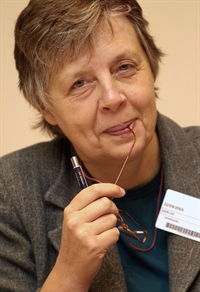 Professor Mieke Verloo is an expert in the fields of gender and politics. She is professor of Comparative Politics and Inequality Issues at Radboud University in the Netherlands, and nonresidential Permanent Fellow at the IWM, Institute for Human Sciences, in Vienna. In 2015, she won the ECPG (European Conference on Politics and Gender)’s Gender and Politics Career Achievement Award. As scientific director of large research projects on gender equality policy making in Europe, she headed the team that produced the final report for the Quality in Gender+ Policy Project, and has edited Multiple Meanings of Gender Equality: A Critical Frame Analysis of Gender Policies in Europe as part of the MAGEEQ Project. She has extensive consultancy and training experience on gender mainstreaming and intersectionality for several European governments and institutions. Her current research is on feminist politics, the meaning of gender in gender policy, and on the opposition to intersectional gender equality in Europe.

*It is ESSENTIAL that you RSVP to Nanette Funk <nanettefunk1@gmail.com> or Sonia Jaffe Robbins <sjr1991@gmail.com> so that we can leave your name with security at the front desk.
We meet at the Center for European & Mediterranean Studies, NYU, 53 Washington Square South, 3rd floor East, 4:30-6 p.m. After the workshop, we usually continue the discussion over an informal dinner, and all are welcome.